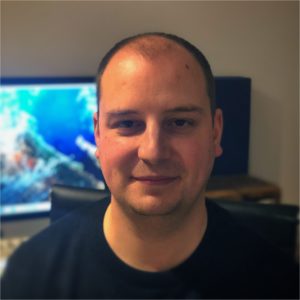 Steven is a composer of emotionally charged, cinematic music who works across feature films, short films, and video games, most notably composing the soundtrack for Twentieth Century Fox Film Corporation Blockbuster PlayStation and XBOX release PLANET OF THE APES: LAST FRONTIER, developed by the Imaginati at Ealing Studios and EP’d by Andy Serkis.

Steven has ongoing advertising and TV sync with nine albums within the Warner Chappell Production Music USA library (album number 10 set for a 2022 release). His track Reborn was used as the soundtrack across the beautiful and futuristic Emporio Armani SS20/ FW21 campaigns.

Steven’s lead instrument is piano/keys and his studio is home to numerous hardware synthesizers all with original patches and sounds programmed by him over the years, which assist with his original composer sound alongside traditional instrumentation and vocal/ string session musician collaborations.

Steven is skilled in music editing, production, and in-game implementation.